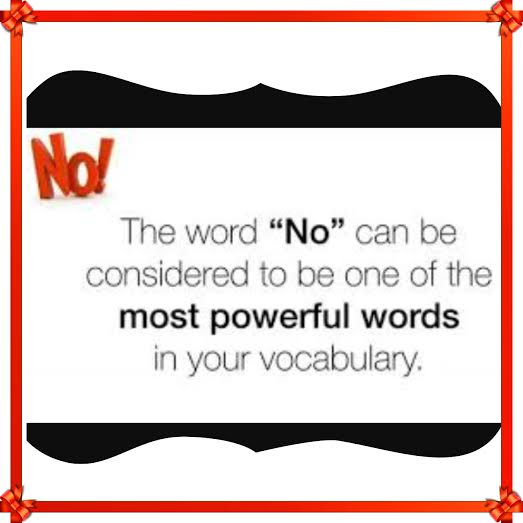 You have the right to say NO!
Just typing that felt so freeing.
NO. Such a little word, two letters, one syllable, yet so powerful.
I have lost important relationships because of the word no. I have felt happiness, guilt, anxiety, stress, over that one word.
I learned many moons ago that I had the power, the right even, to say no. In more recent years I’ve learned I have the right to say no with NO explanation. Learning that one felt pretty exhilarating.
Far too many times I’ve seen people commit to things, complain about them, just become out right miserable all because they couldn’t say no (I was once of those people). When you ask why they put themselves through it you often find it’s out of a sense of obligation. They’ll say but its faaaaaammmmmily or it was the right thing to do.
I’ve talked to many family and friends who are appalled at my ability to say no so quickly.  They gasp at the thought that I can say it, mean it, and not have any guilt associated with my decision.
It’s actually quite simple-I love me enough to say NO!
Don’t misunderstand me-I don’t go around abandoning family & friends.  I still give a helping hand and I still do favors.  What I don’t do is jump at frequent last minute and/or entitled non emergency request.
People will try to use guilt and shame to get you to transform that no into a yes- and it used to work. But when you discover who you are and whose you are, that simple word rolls off the tongue with no problem and more importantly no guilt.
To people who respond to guilt, the people pleasers of the world, learn that enough is enough. You cannot wear yourself thin trying to please everyone. In the end you’ll be mad, depressed, and miserable.  Those that we build healthy, positive interactions with will understand that they will be told no at times. If you reflect on your life and relationships you’ll probably find the folks who guilt you into doing things are the same people who aren’t there for you and have no problem telling you no without any thought or care in the world.
Go ahead! Practice saying no.  You’ll feel better, you’ll teach people how to treat you, people will respect your boundaries, and you’ll probably weed out the toxicity in your life.
P.S: Husbands, don’t get any ideas. Wives don’t usually like the word no.  Ask my husband. She jokes.
Thanks for reading.
❤️Chanee’